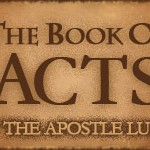 Led by Saul or Tarsus, outside the walls of Jerusalem members of the Sanhedrin executed Stephen, a disciple of Yeshua, the resurrected Christ. “1 Now Saul was consenting to his death. At that time a great persecution arose against the church which was at Jerusalem; and they were all scattered throughout the regions of Judea […]

Accused of blasphemy by Jewish rulers, Stephen, a disciple of Jesus, the resurrected Christ concludes his address to the Sanhedrin. The accused servant of the Lord would now turn the table on his accusers, calling them out as murderers for sending Yeshua to His death on the cross. “51 You stiff-necked and uncircumcised in heart […]

Stephen continues his address to the Sanhedrin, the JEwish governing body who accused the disciple of blasphemy. Stephen’s ministry had led him to this moment, when he now exhorts his audience about God’s true tabernacle. “44 Our fathers had the tabernacle of witness in the wilderness, as He appointed, instructing Moses to make it according […]

Stephen, a servant of the Lord and anointed minister to the poor in Jerusalem was standing before the Sanhedrin, the highest Jewish court who accused the disciple of blasphemy. In his defense, Stephen addressed the Jewish rulers via a recapitulation of scripture, in tune with the teachings of the Torah and old testament. First, Stephen […]

Steven, a disciple and servant of Jesus the Christ and church delegate was being accused of blasphemy by the Sanhedrin, the highest Jewish court in Jerusalem. In his defense, Stephen quotes scripture and delivers an exhortation to those he considers guilty of crucifying the Messiah. “9 And the patriarchs, becoming envious, sold Joseph into Egypt. […]

Steven, a disciple and servant of Jesus the Christ and church delegate was being accused of blasphemy by the Sanhedrin, the highest Jewish court in Jerusalem. In his defense, Stephen quotes scripture and delivers an exhortation to those he considers guilty of crucifying the Messiah. “9 And the patriarchs, becoming envious, sold Joseph into Egypt. […]

Steven’s mission in Jerusalem encompassed both the management food distribution to the poor as well as preaching the truth about the resurrected Christ. As part of God’s perfect plan, the disciple’s preaching led him to stand before the Sanhedrin, accused of blasphemy by the Jewish high court. “1 Then the high priest said, “Are these […]

In spite of persecution and against the law laid down by the Jewish Sanhedrin, the apostles continued to preach the gospel and share the truth about the resurrected Christ, converting seekers as the fulfillment of the great commission. Along side the apostles were countless priests and ministers who answered the call to advance the gospel […]

John was the only remaining apostle of Jesus Christ, and desired to write a congratulatory letter aimed at encouraging believers to pouring out God’s love as each one among us keeps fighting the good fight. “1 The Elder, To the elect lady and her children, whom I love in truth, and not only I, but […]

John’s letter was coming to its conclusion, but not without the apostle first reminding us of the nature of Christ, and the benefit of walking in His footsteps. Addressing wickedness among the people, John warns us of the temptation and persecution that await believers, as each one works out his or her salvation, rooted in […]